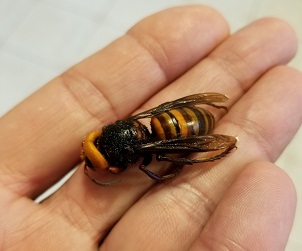 In 2020, the BC Ministry of Agriculture, Food, and Fisheries (Ministry) Apiculture branch typically had a focussed monitoring approach to the Asian Giant Hornet (AGH) on several levels: 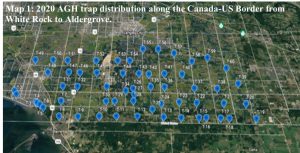 Surveillance results show that this approach was justified, as a total of six AGH specimens were found during a 12 month period (~Nov 2019 – Nov 2020). All of those specimens were reported and found by the public and none were caught in Ministry traps.

The Ministry discovered that all six 2020 Fraser Valley AGH confirmed sightings locations, once connected, covered over 350 sq. km with no sufficient clustering to point to a specific nest location. The entire area could harbour one or more nests. In contrast in September 2019, the five Nanaimo sightings were clustered at ~750 metres from each other and, as ultimately discovered, were within ~500 metres from the actual nest. Locating a specific nest in the Fraser Valley with the existing six dispersed sightings would not be possible unless by chance or with additional clustered confirmed sightings reports.

For 2021, the Ministry will implement a surveillance program again, possibly with more traps, improved attractants (including pheromones), and possibly with radio tagging technology. One of the Ministry’s in-house epidemiologists will help in devising a distribution network of locating traps.

According to the BC provincial apiarist Paul van Westendorp, three years of AGH monitoring with no sightings is required before an area can declare that the AGH has been successfully eradicated. In 2020, there were no confirmed sightings on Vancouver Island. Two more years of monitoring are needed to declare Vancouver Island free and clear of the AGH.

Moving forward, the Nanaimo Beekeeping Club (NBC) will continue encouraging its beekeepers to keep an eye out for AGHs and to report any sightings to The BC Invasive Species Council. Should confirmed sightings reports occur in the central island area, the NBC will mobilize and focus surveillance efforts further and will work closely with the provincial apiarist to coordinate monitoring efforts and information sharing.

In other relevant AGH monitoring news: